Has there ever been a photo which completely proves the existence of ghosts? I think it is sad that most photos, which people see ghosts in, can have simple explanations. But, does that mean they should be entirely discounted?

I read a post about photos of ghosts which the writer believes are creepy and proof of ghosts. I didn’t see even one photo or image which proves anything to me, not fully. Some are interesting, some questionable, tricks of light and perception, mistakes about when the photo was actually taken, and some are probably fakes. 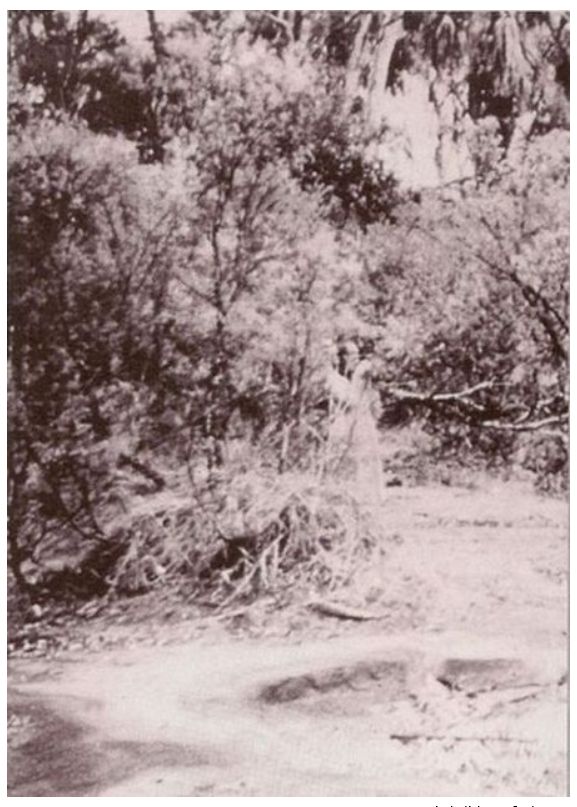 Photo Source: 13 Creepy Photos That Will Convince You Ghosts Are Real – Weird Worm

This photo, from Australia, was taken in 1959. Its called “The Woman at Corroboree Rock”. Do you see the image of a woman among the trees, leaves, light and shadow? I can see it, when I look for it.

I don’t think this photo is a fake. There is a possibility it was set up and configured to look like something was there, but just as likely it was random. What is there are leaves, shadows, a small log/stick on the ground, etc. I don’t believe its a ghost.

If that small log on the ground is the edge of her skirt, she is abnormally tall. Her face isn’t large enough for her body to be that long. Or, should we rethink and only look at what might be a face, hair and hands? The arm is oversized, but she could have been wearing puffy sleeves that day. Her hand is about the size of her face, she is out of proportion all over.

If you look to the left, I can see the face of a monkey. What else can you see if you look at this photo long enough?

Sorry ghost believers, but its just not enough for me to fully believe. I do feel a bit sad not to believe. I do feel those who believe in ghosts and want to prove their existence have a real uphill battle. One obstacle being people who question them and the other people who create fakes and try to fool everyone with them.

In the end, this is all about your perception and what you want to see or believe. If you are looking for something, chances are pretty good you will find it.